Johor Baru: The department of Wildlife and National parks (Perhilitan) acted to remove animals at the controversial Saleng Zoo in Kulaijaya here.

Since the Starphobe exposed the poor condition in which the 40 species animals were kept last month, the zoo had come under intense scrutiny. 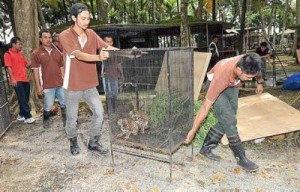 The Perhilitan department removing a baby tiger during the raid at the Selang Zoo.