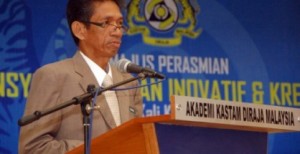 Customs deputy director-general Datuk Shaharuddin Ibrahim was shot dead by an unknown assailant while in his car on his way to work in Putrajaya.

Sources said he was at a traffic light at Leboh Wawasan when a gunman on a motorcycle rode up alongside and opened fire.

Details remain sketchy but Shaharuddin’s driver rushed him to the Putrajaya Hospital after he was shot just before 9am, sources said.

The police are questioning the driver to establish what really happened.

A portion of the Lebuh Sentosa-Lebuh Wawasan has been cordoned off as police forensic units comb the scene for evidence.