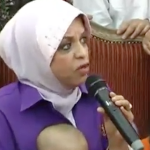 Datuk Seri Shahrizat Abdul Jalil said Sunday she will step down as Women, Family and Community Development Minister when her term as senator ends on April 8.

However she will remain as Wanita Umno chief.

In a response later Sunday, Prime Minister Datuk Seri Najib Tun Razak expressed his gratitude to Shahrizat for her decision and urged Wanita Umno members to continue giving their full cooperation to their leader.

He said in Pekan that although there was no proof that Shahrizat did anything wrong, she had made the right decision so as to not burden the Government.

Shahrizat told reporters: “I want to stress that I made the decision on my own. I love this nation and have the greatest respect for the government and the prime minister.

“I have nothing to do with NFC (National Feedlot Corporation). I just happened to be married to the chairman.

“I’ve been in politics a long time, and it is the right thing to do,” she told reporters at Desa Water Park.