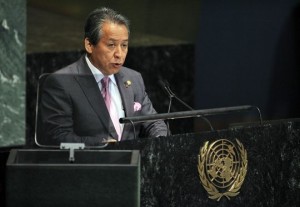 A statement from the ministry said Anifah touched on issues such as extremism, human rights, Syria, Palestine and the reform of the United Nations (UN).

The statement said that during the 67th UNGA session from Sept 23, Anifah attended several high-level meetings, including on the rule of law, peace-building – the way towards sustainable peace and security and countering nuclear terrorism and the UN Alliance of Civilisations Group of Friends Ministerial Meeting.

The statement also said that on the sideline of the session, Anifah met Deputy Secretary of State of the United Sates of America William J. Burns and Pakistan’s Foreign Minister Hina Rabbani Khar.

The statement said that during the meeting, Burns commended Malaysia’s effort to overcome extremism and promoting peace through Global Movement of Moderates and both parties discussed issues on Palestine, the conflict in Syria as well as Iran’s nuclear programme.