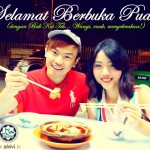 “Since the photo was released last week, many from the Chinese community have come out to condemn the action. “Malaysians now demand Alvin and Vivian to be charged and thrown to jail immediately.

“Maybe the trend (of insulting Muslim) was a result of the 13th general election… maybe DAP have sponsored them,” he said when debating the supplementary budget motion in the Parliament today. His statement prompted DAP parliamentarians Nga Kor Ming (Taiping), Ngeh Koo Ham (Beruas) and Anthony Loke (Seremban) to immediately urge Bung Mokhtar to retract his slanderous remarks. Teresa Kok (DAP-Seputeh) cited Standing Order 36 that an MP was prohibited to utter statement that amounted to malicious allegation against fellow parliamentarians.

To this Bung Mokhtar replied: “I did not say DAP parliamentarian, I said DAP, the party in general.”

Man was kidnapped and beaten because of Alvivi – IGP