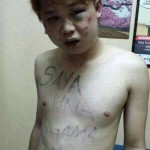 The insensitive posting by controversial sex bloggers Alvin Tan and Vivian Lee has led to a man being kidnapped and beaten by a group of men in Shah Alam.

“The motive for that (abduction) was revenge for what Alvin and Vivian did,” said Inspector-General of Police Tan Sri Khalid Abu Bakar at a press conference in Bukit Aman Tuesday.

According to him, their actions angered certain quarters, which indirectly led a man to be abducted, beaten and words written on his body. 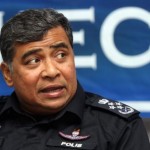 Khalid said the abduction happened around 3am Monday, where the victim, 24, was kidnapped by a group of men while having a meal with his girlfriend at a restaurant.

The group allegedly stripped the victim of his clothes and took him to a wooded area before beating him up.

They also wrote “Saya Hina Agama Islam” (I insulted the religion of Islam) on his torso.