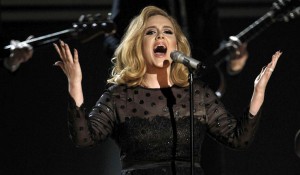 Soul traditionalist Adele triumphed over pop stars, a veteran rock act and an up-and-coming songwriter/producer to win the most prestigious Grammy prize, album of the year, for her “21.” It was her sixth award out of six nominations, a clean sweep. The heavy front-runner, Adele shocked no one in taking the top honor at the 54th Grammy Awards.

Her “21” was championed by critics and embraced by fans, as it was the top-selling album of 2011 and hasn’t left the top 10 on the U.S. pop charts since its release last February.

Adele, who was named best new artist at the 2009 ceremony, underwent vocal surgery in November and was forced to cancel her U.S. tour. Tonight’s Grammys marked her return to the stage, and her album of the year win signaled that Grammy voters will opt for songcraft, raw emotion and a dazzling voice over pop trends or guitar slingers. She bested the performance-art pop of Lady Gaga, singles machine Rihanna, pop/R&B handyman Bruno Mars and alt-rock survivors Foo Fighters.