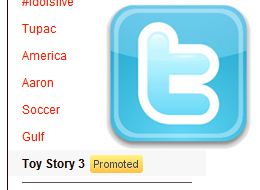 We’ve already noted reports that Twitter is preparing to up its ad game by placing paid-for tweets right in the middle of your Twitter stream. Now we know the deadline for the change-over.

Promoted tweets will start showing up in users’ timelines within the next 8 weeks, according to several sources who have been briefed on the matter.

Twitter has been aggressively courting advertisers in the last few weeks, assuring them that promoted tweets are no experiment. They won’t just appear in Twitter search or Hootsuite, as in the company’s tentative moves in this direction in the past year. Nor will they be banished to the sidelines of Twitter.com, the way promoted trends are. They’re coming very soon, they’re here to stay, and the company is looking into ways to make sure we’ll see them — such as making the promoted tweets “sticky”, so they stay at the top of the page no matter how far you scroll down.

One For The Money Trailer

Russell Peters Coming to Malaysia in May 2012