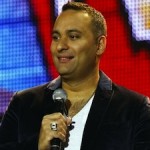 Popular comedian Rusell Peters will hit our shores this coming May 2012, it’s part of his “Notorious World Tour”.

Rusell announced on his facebook page that he will also visit Singapore, Jakarta and Thailand, although the exact date, venue and organizers are as of now not confirmed yet one thins we do know that it’s in the month of May, see screenshot below.

This is shaping up to be a good year for Malaysian with the recently concluded Twin Towers @LIVE still fresh in our minds, and the likes of Avril Lavigne, Jessie j, Flo-rida, Nicole Scherzinger, Wong-Fu productions, Girls Generation and more already hitting our shores.

Russell posted on twitter that he could NOT make it to Malaysia because the promoters didn’t get their act together:

Dear Malaysian fans…. I’m sorry but I won’t be coming there yet again…. The promoter couldn’t get their shit together so I can’t come

HOWEVER, there is still HOPE as he reposted that he might make it :

we are still waiting for final confirmation!