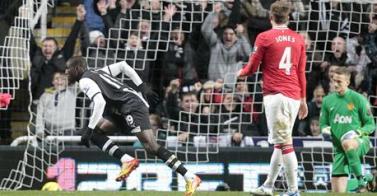 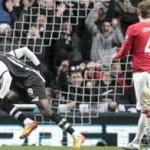 Manchester United’s Premier League title hopes were dealt another blow on Wednesday as they were beaten 3-0 by Newcastle United.

Ba struck first – volleying past Anders Lindegaard following Shola Amoebi’s flick-on – before Cabaye scored from a 30-yard free-kick just after half-time to secure all three points for the Magpies. In the end Jones’ late mistake just added to the crowd’s joy – the former Blackburn defender getting in a mix-up with goalkeeper Anders Lindegaard to head into his own net under pressure from substitute Leon Best.

Sir Alex Ferguson was clearly looking to put the memory of the defeat to Blackburn Rovers behind him, as he restored Wayne Rooney to the starting line-up and opted for Lindegaard in goal ahead of David De Gea. Alan Pardew, meanwhile, named Ameobi in attack alongside the prolific Ba as he looked to win a physical battle with the opposition.

The visitors may have grabbed the pre-match attention with their team selection, but it was Newcastle who started the brighter. Ba had a glorious opportunity to add to his tally for the season inside the first five minutes, but managed to completely miss the ball after being fed it, unmarked, eight yards from goal.

The away side were the first to test the goalkeeper, however, after Nani wriggled free on the edge of the box. The Portuguese winger’s curled effort could only be punched away by Tim Krul, who was able to gather the ball after Rooney, following it in, was unable to get it under control.

Minutes later Dimitar Berbatov went even closer, seeing his header hit the post after taking a sizeable deflection off Davide Santon – although the referee awarded a goal kick.

Both sides had their moments – Rooney wasted a glorious opening after seeming to presume he was offside, before Rio Ferdinand was perhaps fortunate not to concede a penalty after a clumsy tangle with Ba – before the first goal of the game it arrived. It came from the home side, and it came from Ba. A long free-kick from Krul was flicked on by Shola Ameobi, and Ba turned and volleyed the ball well in one swift movement well beyond Lindegaard’s reach – with Ferdinand once again left struggling to close down his man.

Newcastle grew into the game from that point, with Ryan Taylor firing a free-kick over the bar and Ba once again testing Lindegaard’s reflexes. But Manchester United were able to survive until the break.

Ferguson sent his side out early for the restart – perhaps punishment for their subdued first half display – but they were second best once again, and within two minutes the lead was doubled. Jones picked up a deserved yellow card for a cynical foul on Ba as he rushed towards goal, and from the resultant free-kick 30 yards from goal, Cabaye hit a glorious strike that Lindegaard could only get a finger on as it crashed off the underside of the bar and in.

The title challengers nearly reduced the arrears on the hour mark, but Danny Simpson did well to clear off the line from Rooney’s attempt to turn home, before Ryan Taylor just got a touch on Nani’s follow-up cross to deny the onrushing Ji-sung Park. Minutes later Park had the chance to turn provider, but saw his low cut-back cleared away by Fabrizio Coloccini.

Nevertheless, it showed the champions were increasingly coming back into the match – but finding a breakthrough was a different matter. Ferguson tried everything to improve his side’s fortunes, even bringing off Rooney for Anderson before another substitute, Danny Welbeck, failed to latch onto Michael Carrick’s through ball. Despite increasing the pressure, however, it looked as if Newcastle would hold on comfortably.

It would then get even better for the Magpies in the dying minutes, just after the rapturous St James’ crowd had risen as one to applaud Ba, who had been replaced by Gabriel Obertan.

Once again Krul’s long clearance caused United problems, but this time they were entirely of United’s own making – as Jones failed to see Lindegaard had left his goal to go and collect the ball – heading past the Dane and into the back of the net as United slumped to their second successive league defeat and Newcastle’s impressive season continued.