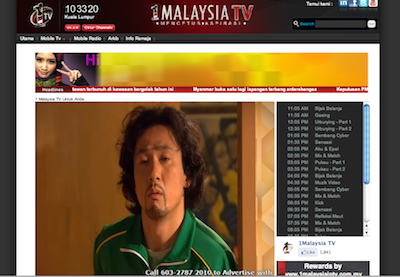 Speaking at a glitzy launch, Mr Najib said “1Malaysia TV” would allow “speedy” and “accurate” information to be disseminated to the public.

He acknowledged that there was currently an information “vacuum” with regard to news and issues affecting the country, causing Malaysians to turn to “other sources” online to gain information.

Mr Najib said: “We do not have a choice. We have to disseminate fast and accurate information to the rakyat (people). When there is a vacuum, that vacuum is filled with (information through) other sources, sometimes it is mixed with fairy tales, false news and slander.”

He called on politicians and government officers to start using social media to interact with the public, noting that Malaysia has been identified as “the most cyber-social” country in the world.

1Malaysia TV will be run by 1 Media IPTV. Content providers include RTM1, RTM2, TV3, TV Al-Hijrah, MyTV, CCTV1, e-Korea TV, e-rama tv, and Documentary TV. It is targeted at viewers aged between 18 and 25.

Besides going online at www.1malaysiaiptv.com.my or www.erama.tv/mobiletv, users may download the mobile applications needed to view the channels via smart devices such as the BlackBerry, iPhone, iPad or Android.

The Sedition Act 1984 will be reviewed – Najib