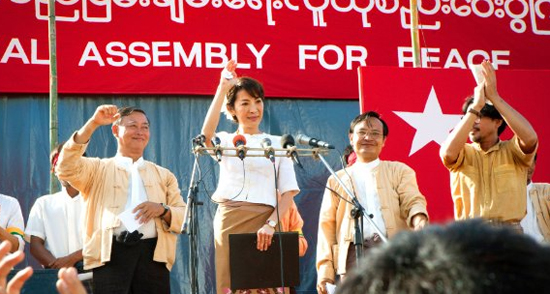 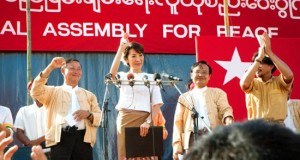 Aung San Suu Kyi biopic star Michelle Yeoh jumped at the chance to play the Nobel Peace Prize winner, saying, “How many iconic female Asian figures do we know in our time?” in a televised interview.

Yeoh said she took the script, written with her in mind, to friend Luc Besson. “I felt that Luc had the best experience because he was an amazing director. He had a very strong production and distribution company, so he know the ropes,” she said, but wasn’t sure Besson would be interested. “Unless he fell in love with the movie, he wouldn’t do it.,” she told CNN’s Talk Asia.

Although Yeoh was not called upon to perform her own stunts as she had in the martials arts films where she got her start, she had to do something just as challenging: learning the Burmese language.
“it was one of the crucial things that I had to do a and I promised my teacher who is a lecturer in Burmese so that it would not sound like a foreigner trying to speak Burmese, and that if the Burmese heard what I said, they would understand me,” Yeoh said.

Yeoh finally met Suu Kyi, whom she refers to by her Burmese title, Daw Suu, in Dec. 2010. “I was so nervous. I had fortunately spoken to her a few times, and Kim [Suu Kyi’s son] was en route to Bangkok to meet his mom for the first time in years. And we were just thinking, we are just there, so we should go to. We all handed in our passports, and all of our visas were rejected except mine.”

[aside]”The Lady” is more than just a movie about Burma’s human rights champion Aung San Suu Ki. When it debuts in theaters next spring, it may play a key role in keeping her free of house arrest while she struggles to bring democracy to a land beset by military tyranny since the assassination of her father in 1947.[/aside]