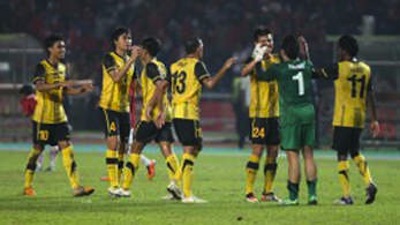 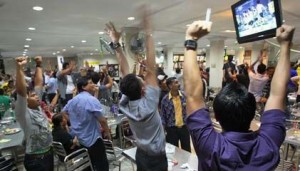 What a heart stopping game it was between Malaysia and Indonesia, the host took the lead early on the 5th minute when Gunawan Dwi Cahyo rose high to score with a header from a corner kick.

However Malaysia drew level in the 38th minute with a sliding header by Mohd Asraruddin Putra Omar.

That however was not the end of the drama as both teams had a go at it and both has goals disallowed because of offside.

The game went on to extra time and the teams still could not be separated and with the 80,000 or so Indonesian fans cheering their team on, team Harimau Muda had to really dig deep to keep their opponents at bay.

Than came the penalties,Skipper Baddrol Bakhtiar converted the winning penalty. Both teams were tied 1-1 after full-time and extra-time play.

In the penalty shoot-out, Titus Bonai, Egi Melgiansyah and Abdul Rahman were on target for Indonesia while Gunawan Dwi Cahyo and Ferdinan A.S. failed to convert their attempts.

For Malaysia, Mahalli Jasuli, Fandi Othman and Mohd Fadhli Shas were spot on with their kicks while Ahmad Fakri Saarani failed to make good.

Baddrol then stepped up to take the fifth penalty for Malaysia and did not fail his teammates.