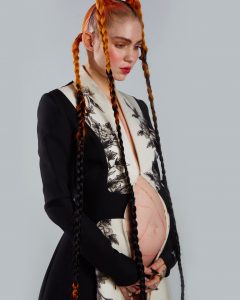 Canadian singer, songwriter, record producer and visual artist,Grimes, has shared “Delete Forever,” a new song from her upcoming album Miss Anthropocene. Check out the music video, by Grimes, Mac Boucher, and Neil Hansen, below. According to the YouTube description, the visual “depicts a tyrant’s lament as her empire crumbles.”

In an interview for Apple Music’s Beats 1, Grimes told Zane Lowe that the song is about the opioid epidemic, noting that she wrote it on the night that Lil Peep died. “It’s a pretty bummer song,” she said. Scroll down to watch their conversation.

Miss Anthropocene, Grimes’ follow-up to 2015’s Art Angels, is out February 21. So far, she has shared the songs “So Heavy I Fell Through the Earth,” “Violence,” and “My Name Is Dark.” She also performed “4ÆM” during the 2020 Game Awards.