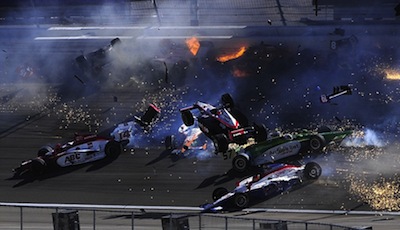 An IndyCar champion was killed today after his vehicle burst into flames following a high-speed 15-car pile-up.
Briton Dan Wheldon died while competing in the Las Vegas Indy 300 where drivers reach speeds of up to 222mph.
The 33-year-old’s Dallara-Honda car was catapulted over another racer and hurled into fencing, where it went up in flames.

Mr Wheldon, a former private school pupil originally from Buckinghamshire, was rushed to hospital in a helicopter but died as a result of his severe injuries.
The fiery pile-up, on the 13th lap of the 300-mile race, involved almost half of the race’s 34 participants.
The married father-of-two, who is survived by his wife, Susie, and two sons, Sebastian, two, and six-month-old Oliver, had been in line for a $5million bonanza if he was first across the finishing line.