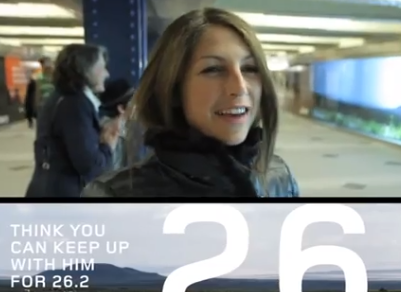 The ad is from creative agency Vitro Videos, and the concept is insanely smart. They brought in real world marathon runner (and Olympic athlete), Ryan Hall, and filmed him running at his normal marathon pace, using multiple cameras side by side. Then they installed a video wall in a public subway station, so that the final video of Hall makes it appear that he’s running through the station.
Finally, they invited anyone and everyone to try and race against the video of Hall. And not one person was able to beat him to the finish line 60 feet away.