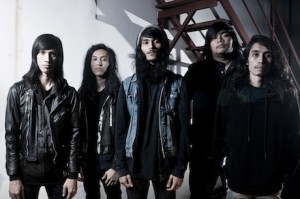 With a week to go to the first Rockawayfest Showcase of 2013, Livescape announces the change of concert venue. The special showcase featuring American bands, Coheed and Cambria with special guests Circa Survive will now move from KL Live to the Bentley Music Auditorium in Mutiara Damansara, Petaling Jaya. “We’ve decided to move to a more intimate venue to bring both bands closer to their fans and the Bentley Music Auditorium is also engineered for better acoustics which we are certain the punters will cherish”, said Rahul Kukreja, Director of LIVE Events for Livescape.

In line with their mission of highlighting local talents, Livescape has added Malaysia’s post-hard-core phenomenon, Tres Empre into the line-up. “We are very excited to have Macbeth Footwear and one of their endorsees TRES EMPRE opening up for the show, we had them up on stage at Rockaway 2011 and since then, the band has gained a strong fan base. They will also be releasing their album later in the year,” he continues. 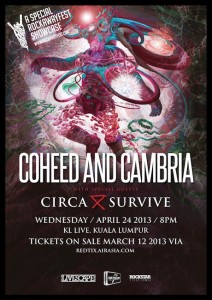 Since their inception in late 2010, Tres Empre have evolved from being a post-hard-core band to a fluid, dynamic, melodic group that adeptly blends catchy melody, charged rhythmic guitars and ambient moods. In April 2011, the band released their single called, ‘Defiance’, followed up by their sold-out debut EP entitled Division Of Dreamers in 2012. These fine lads are currently working on their first full-length album, which is scheduled for release at the end of 2013.

This show is the fourth Rockawayfest Showcase organized by Livescape and it is their first collaboration with Singapore’s, LAMC Productions. The showcases are smaller scale gigs, which lead up to the finale, Rockaway Festival 2013. Pre-sale tickets at RM120 are still available via AirAsia Redtix and its participating outlets Rock Corner and Victoria Music Centre until 23 April 2013. On concert day, tickets can be bought at the price of RM170.

New York progressive rockers Coheed AND Cambria are touring in their epic two-part, release The Afterman while Circa Survive are out and about promoting their latest album, Violent Waves. Last October, Coheed and Cambria released the latest instalment of their career-spanning Amory Wars saga with Ascension, the first part of their double album The Afterman. Part two of the album, Descension, which made its debut on the 5th of February. Violent Waves is the fourth studio album by Circa Survive and it was released late last year. The album was recorded in a span of a week and proudly produced by the band.