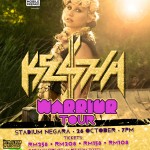 Pop princess Ke$ha’s concert scheduled to be held at the iconic Stadium Negara on October 26 has been canceled.

Livescape (organiser) released a press statement stating that they were told at the 11th hour by PUSPAL that the show will not go on.

It is with deep regret that we announce that the Kesha Warrior Tour, which was to be held at Stadium Negara, Kuala Lumpur on Saturday, October 26, has been called off.

Despite us at Livescape producing documents that assures authorities that all guidelines listed by PUSPAL for the Kesha Warrior Tour will be complied by the artist and her management agency, we have been informed that our application has been denied at the 11th hour. As one of the leading live music entertainment agencies in the country and having produced over 100 shows, Livescape would like to go on record to state that we have always adhered to all guidelines set forth by PUSPAL.

To the fans, we apologize for the situation you have been put through. We have done everything we can to fight for the show to go on. Like yourself, we were looking forward to what we believe would have been a great show. To those of you who have purchased tickets to the show, kindly logon to www.facebook.com/livescapeasia for details on refunds, which will be announced within the next few days. We will also be offering travel reimbursements to fans that have travelled from abroad or different states within Malaysia to see the show – subjected to certain terms & conditions.

Livescape would also like to go on record to applaud and thank Kesha and her team for working closely with us and having agreed to modify the show to suit the Malaysian culture and sensitivities, including having made adjustments to her song lyrics, wardrobe changes, and a set list that was modified to specifically adhere to the guidelines set forth by the authorities.

Livescape accepts and respects the decision made by PUSPAL despite us having lost over RM1.1million overnight. However we do feel that the current situation could have been avoided, or at best, our losses reduced if we were been informed of the decision and reasons to decline our application sooner.

Hence, we can’t help to believe that improvements can be made to the current application system in place for artists’ permits. We encourage the authorities to engage in a productive dialogue with local promoters to avoid the current situation from happening again. With local promoters in this country constantly finding themselves taking great financial risks when putting on a live show despite the fact that some of these shows helps puts Malaysia on the world map as it draws in spectators and fans from various countries, especially with the country set to welcome tourists as part of the Visit Malaysia Year 2014 campaign next year.

Promoters in this country are constantly bearing the highest risk, despite the fact that all we want to do is to help promote Malaysia as a viable live music destination and to provide music lovers in this country an opportunity to see their favourite acts live.