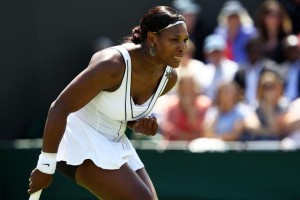 Defending champion Serena Williams recovered from a slow start to beat Romanian Simona Halep 3-6 6-2 6-1 in the Wimbledon second round.

The American seventh seed, just four matches into her comeback after 49 weeks out through injury and serious health issues, was initially blown off her stride by the tenacious Romanian teenager before breezing into the third round.

Dispatched to Court Two, the atmospheric sunken bowl in the heart of the All England Club, the 29-year-old resembled a powerful sports car without enough room to manoeuvre in the early stages as Halep struck the ball with real freedom.

Despite being largely outplayed in the opener, there was never a sense of panic and once she began middling the ball sweetly she moved smoothly through the gears.