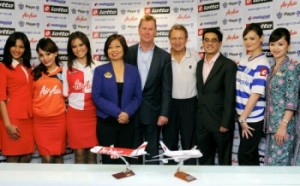 “We are absolutely thrilled with this partnership with QPR. This is a timely and significant relationship between two brands which are keen in taking on any challenges for the taste of success. Our logo on QPR’s away and third shirt does not only symbolize our energetic partnership, but also a joint-representation of the hard work and challenges that we went through – for AirAsia to be the world’s best low cost airline for three consecutive years and QPR to make a comeback into top flight football for the first time in 15 years,” said AirAsia Regional Head of Commercial, Kathleen Tan. “This is a very meaningful moment for all of us, and we are very excited to jointly associate ourselves with a team like QPR, as they have a remarkable history in English football and their unrelenting spirit reflects our own Asian endeavour for success. Collaboratively, AirAsia and Malaysia Airlines can certainly build a very strong following for the QPR brand in a very passionate football audience in Asia.”

QPR CEO, Philip Beard, said, “This is a unique and exciting venture for the Football Club. Attracting two major Asian companies to come on board shows the global appeal QPR has as a brand. We are extremely positive about building a thriving relationship with both businesses in a bid to broaden our exposure in Southeast Asia and further afield. This is a remarkable deal for the club and brings further positive news following a highly successful few weeks since the takeover was finalised.”

[aside]Queens Park Rangers Football Club returned to top flight football in the Barclays Premier League (BPL) for the first time in 15 years after clinching the 2010 / 2011 npower Championship.
[/aside]