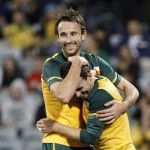 MALAYSIA were like lambs to the slaughter as Australia inflicted the heaviest defeat yet on K. Rajagobal’s side since he took over the national team in 2009 after a 5-0 rout in an international friendly in Canberra yesterday.

A pair of Japan-based players, Joshua Kennedy and Alex Brosque, scored a brace each after Dynamo Moscow’s Luke Wilkshire opened scoring in the third minute as the Australians raced to a 4-0 half-time lead to lay bare the gulf in standards between the 19th and 147th-ranked teams.

While Malaysia improved considerably after the break following three substitutions, Rajagobal’s new-look midfield in the absence of Selangor pair Safiq Rahim and Amirulhadi Zainal, failed to shine as they were overrun by Australia’s silky moves and better coordination.