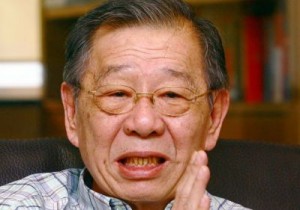 Tun Dr Lim Keng Yaik, former Gerakan chief, and former Minister of Energy, Water and Communications, passed away today at the age of 73 according to TheStar.

The Perak-born, who retired from politics just before the 2008 general election, died at his home.

He said the cortege would leave his father’s home at Tropicana Golf and Country Resort here at 11am before being cremated at the Cheras Crematorium in Kuala Lumpur.

Speaking to reporters here on Sunday, he said those who wished to pay their last respects to his late father could do so from Sunday until Tuesday, from morning till 9pm.

“After 9pm, we hope everyone would leave as we have prayers to conduct at home,” he said.

Keng Yaik passed away at 5.13pm on Saturday, leaving behind his wife Toh Puan Wong Yoon Chuan and three children. He was 73.

Hardly able to hold back his tears, Si Pin said that his father had been sick for more than year. “In fact, last week my family and I had planned a family holiday with my parents to Hong Kong but father said he did not want to follow as he could not walk due to severe leg pain.

“But he told us to take the family holiday,” he said.

Si Pin said that for the last two days, Keng Yaik had been in Tropicana Medical Centre with breathing difficulties.

“Yesterday, he called me and told that he was too sick and asked me to return home immediately with my family,” he added.