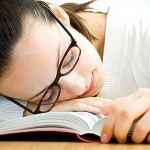 According to a research presented at the SLEEP 2012 conference in Washington, sleeping less than six hours a night for a long period of time can cause the increase of the risk of stroke symptoms among the middle-age to older adults.

5,600 people involved in the study claims that poor sleep can impair human body. The participants had no history of stroke at the start of the study.

After adjusting for body-mass index, the researchers found that there’s a strong association with daily sleeping time of less than six hours and a greater risk of stroke symptoms for middle-age to older adults.