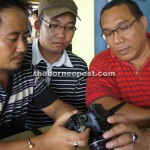 Unexplained chilling sounds, which filled the air of Samarahan in the wee hours of Jan 11 and 12, have residents there puzzled and perturbed until today.

One of the theories being thrown into the pan is that it could be a by-product of the High Frequency Active Auroral Research Programme (HAARP) undertaken by the United States, while others believed it were from processing machines hard at work at an oil palm factory owned by Felcra in Kampung Endap.

But the fact remains that until today the mysterious sounds, which some say resembled loud snoring sounds, remain veiled.

Teacher Mohd Ferdauz Jemain, who lives at Kampung Meranek, was one of those who heard the unexplained phenomenon on Jan 11.

“It was around 2 am when I was awoken by a strange sound. It was a loud hushing sound,
and quite similar to someone snoring.

“I immediately got out of bed and went outside of my house to see what was happening. The feeling was a chilling one. I could not establish where the sound was coming from … it was as if something coming from the sky.

“Frightened, I quickly dashed inside, but stayed awake till daylight as I would not sleep any longer. If I am not mistaken, the sound persisted until about 5am.”