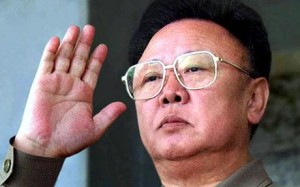 Kim Jong Il, North Korea’s mercurial and enigmatic leader whose iron rule and nuclear ambitions for his isolated communist nation dominated world security fears for more than a decade, has died. He was 69.

Kim’s death was announced Monday by the state television from the North Korean capital, Pyongyang.
Kim is believed to have suffered a stroke in 2008 but he had appeared relatively vigorous in photos and video from recent trips to China and Russia and in numerous trips around the country carefully documented by state media. The communist country’s “Dear Leader” — reputed to have had a taste for cigars, cognac and gourmet cuisine — was believed to have had diabetes and heart disease.

The news came as North Korea prepared for a hereditary succession. Kim Jong Il inherited power after his father, revered North Korean founder Kim Il Sung, died in 1994. In September 2010, Kim Jong Il unveiled his third son, the twenty-something Kim Jong Un, as his successor, putting him in high-ranking posts.
Kim Jong Il had been groomed for 20 years to lead the communist nation founded by his guerrilla fighter-turned-politician father and built according to the principle of “juche,” or self-reliance.
Even with a successor, there had been some fear among North Korean observers of a behind-the-scenes power struggle or nuclear instability upon the elder Kim’s death.

Few firm facts are available when it comes to North Korea, one of the most isolated countries in the world, and not much is clear about the man known as the “Dear Leader.”

North Korean legend has it that Kim was born on Mount Paekdu, one of Korea’s most cherished sites, in 1942, a birth heralded in the heavens by a pair of rainbows and a brilliant new star.
Soviet records, however, indicate he was born in Siberia, in 1941.

Kim Il Sung, who for years fought for independence from Korea’s colonial ruler, Japan, from a base in Russia, emerged as a communist leader after returning to Korea in 1945 after Japan was defeated in World War II.

With the peninsula divided between the Soviet-administered north and the U.S.-administered south, Kim rose to power as North Korea’s first leader in 1948 while Syngman Rhee became South Korea’s first president.
The North invaded the South in 1950, sparking a war that would last three years, kill millions of civilians and leave the peninsula divided by a Demilitarized Zone that today remains one of the world’s most heavily fortified.

In the North, Kim Il Sung meshed Stalinist ideology with a cult of personality that encompassed him and his son. Their portraits hang in every building in North Korea and on the lapels of every dutiful North Korean.

Kim Jong Il, a graduate of Pyongyang’s Kim Il Sung University, was 33 when his father anointed him his eventual successor.

Even before he took over as leader, there were signs the younger Kim would maintain — and perhaps exceed — his father’s hard-line stance.

South Korea has accused Kim of masterminding a 1983 bombing that killed 17 South Korean officials visiting Burma, now known as Myanmar. In 1987, the bombing of a Korean Air Flight killed all 115 people on board; a North Korean agent who confessed to planting the device said Kim ordered the downing of the plane himself.
Kim Jong Il took over after his father died in 1994, eventually taking the posts of chairman of the National Defense Commission, commander of the Korean People’s Army and head of the ruling Worker’s Party while his father remained as North Korea’s “eternal president.”