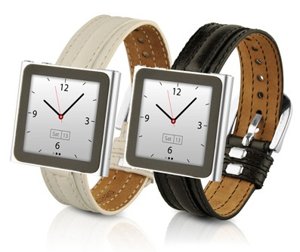 Ever since Apple released the latest iPod Nano last year, manufacturers everywhere started coming up with their own wrist straps to turn iPod Nano players into watches. While they all serve a similar purpose, it’s what they look like that sets them apart. beyzacases has just introduced the brand new Nano Band wrist strap that just oozes with class. When attached to your iPod Nano, it makes it look like some fancy store-bought watch.

The Nano Band is made from genuine leather, is easy to attach to the iPod Nano and can be worn on any size wrist. It doesn’t get in the way of the player’s controls, and fastens just like a traditional watch. If you’re looking for any extra features you won’t find them here. No word on how much these babies will cost but we don’t expect anything too cheap, considering they’re part of beyzacases’ exclusive collection.