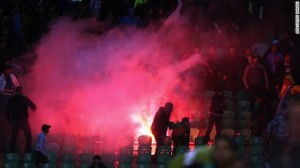 Cairo (CNN) — Political tensions flared Wednesday after more than 70 people were killed when fans rushed the field and rioted at a soccer game in Egypt.
It was unclear whether intense sports rivalries or political strife caused the clashes in the northeastern city of Port Said.

Hours after the fighting, protesters in Cairo chanted, “Down with military rule.” And the secretary-general of the Muslim Brotherhood party blamed Egypt’s military for the deaths.
Egypt’s interior ministry blamed fans for provoking police.
A committee will investigate the circumstances surrounding the fighting, the Supreme Council of the Armed Forces said in a statement early Thursday.

The clashes left at least 74 dead, Egypt’s health ministry said in a statement. At least 1,000 people were injured, 150 of them critically, ministry spokesman Dr. Hisham Shiha said. Most of the injured had concussions and deep cuts, he said.