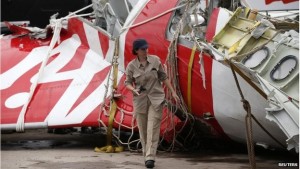 The head of Indonesia’s search and rescue agency, Bambang Soelistyo, said teams were still looking for the second device, its cockpit voice recorder.

AirAsia flight QZ8501 disappeared in bad weather on 28 December with 162 people on board.

The aircraft, which was flying from Surabaya in Indonesia to Singapore, is thought to be deep in the Java Sea.

Dozens of bodies have been recovered but most of the victims are believed to still be inside the fuselage, which has not been found.

It is hoped that the recovery of the flight data recorder will help investigators find out what happened to the plane during what should have been a brief, routine flight.