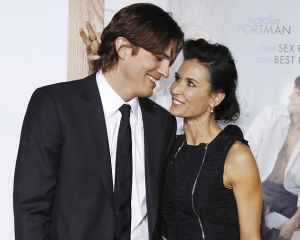 Demi Moore has announced she is ending her six year marriage to Ashton Kutcher.
The 49-year-old actress said in a statement today that she is filing for divorce with ‘great sadness and a heavy heart’.
Hinting at Kutcher’s infidelity, Demi said: ‘As a woman, a mother and a wife, there are certain values and vows that I hold sacred, and it is in this spirit that I have chosen to move forward with my life’.

Moore added that it’s a trying time for her and her family and asked for people to respect her privacy.
Immediately after the announcement, 33-year-old Ashton posted his own statement on Twitter.
He wrote: ‘I will forever cherish the time I spent with Demi.
‘Marriage is one of the most difficult things in the world and unfortunately sometimes they fail. Love and Light, AK.’
The pair are still following each other on Twitter in wake of the announcement and Demi’s handle remains @mrskutcher – something she may now consider changing.
Despite their dignified statements, Demi is now gearing up to battle it out over their $290m fortune after enduring public humiliated because of his alleged infidelity.