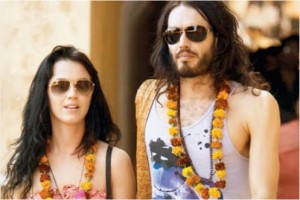 Russell Brand has said that he still ‘adores’ his wife Katy Perry, despite filing for divorce from her yesterday after just 14 months of marriage.
In a sentimental statement he informed that the couple were ending their marriage, but said he hoped that they would remain friends.
It came as the 36-year-old comedian stepped out looking downcast without his wedding ring on in London yesterday.

Brand said in his statement: ‘Sadly, Katy and I are ending our marriage. I’ll always adore her and I know we’ll remain friends.’
His legal team filed court documents at the Superior Court in Los Angeles yesterday citing ‘irreconcilable differences.’
The divorce documents, which refer to Perry by her give name Katheryn Elizabeth Hudson, show there are ‘community property assets,’ suggesting there may not be a pre-nuptial agreement in place.
It does not list a date of separation.