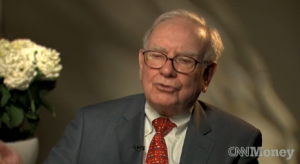 In the worst quarter for U.S. stocks since the financial crisis, investor Warren Buffett went on a stock buying spree.

A filing late Friday from Buffett’s Berkshire Hathaway (BRKA, Fortune 500) shows it bought $20 billion in stocks in the three months ended Sept. 30 — including $6.9 billion worth of dabbling in U.S. stocks.

The purchases also included the $8.7 billion purchase of specialty chemical company Lubrizol Corp., which closed in the quarter after being announced earlier in the year, and $5 billion in preferred shares and warrants of Bank of America (BAC, Fortune 500).

The $6.9 billion in common stock purchases represented a fairly aggressive market position, said Greggory Warren, the analyst who follows Berkshire for Morningstar.
“That’s a better jump than we’ve seen from them in a while,” he said.