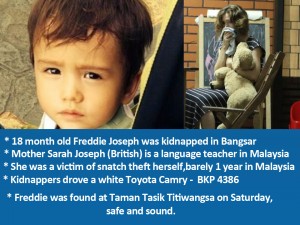 Baby Freddie, who was kidnapped in Bangsar, has been found at Taman Tasik Titiwangsa on Saturday.

Freddie’s family are on their way to the Titiwangsa police station.

On Friday, a man stormed into the house of Sarah Joseph, a 39-year-old British woman, in Jalan Terasek 7 and abducted her 20-month-old child.

According to a family friend of language teacher Joseph, the man had burst into her home in Jalan Terasek at around 6.20pm and took away her son, Freddie.

At that time, Joseph was alone with the baby, having dinner on the porch while her maid was inside the house near the upscale neighbourhood near Jalan Telawi which is popular with expatriates.

Joseph had stepped into the house for a while before she heard plates falling and rushed out.

It was then that she saw the man grabbing the baby from his chair.

The man then ran out of the house and drove off in a white Toyota Camry.