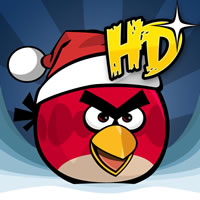 The ever so popular mobile game The Angry Birds had a very impressive Christmas day, no they launch themselves into Santa but they did rake up some impressive stats.

We’re really excited to have such a massive number of new people get acquainted with Angry Birds over the holidays — we have exciting new releases lined up for 2012, and can’t wait to introduce them to the public.”

Of course, the 6.5m figure is a combination of three games — Angry Birds, Angry Birds Seasons and Angry Birds Rio — and the numbers cover both paid and free downloads, across all platforms.

Rovio is also set to start launching Angry Birds recreation parks in Finland and throughout Europe in 2012, so we can expect to see Angry Birds’ omnipresence cranked up a few notches in the months and years ahead.