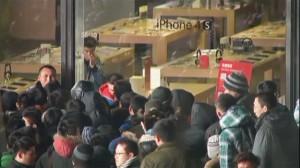 BEIJING – Apple said Friday it was suspending sales of the iPhone at its China stores after fans desperate to get their hands on the new model fought with a security guard and threw eggs at an official store.

Police detained at least two people outside the Beijing shop on Friday when angry crowds who had queued for hours in freezing temperatures for the Chinese launch of the iPhone 4S scuffled with security after being refused entry.

Apple said later Friday after the botched launch at its store in Beijing’s trendy Sanlitun district that it would halt all retail sales of the latest iPhone in China for the time being, but said the phones would be available online, through its partner China Unicom or at official Apple resellers.

“We’re suffering from cold and hunger,” a man in his 20s shouted to Reuters Television. “They said they’re not going to sell to us. Why? Why?”

“I got in line around 11 p.m., and beyond the line the plaza was chock full with people,” said Huang Xiantong, 26, outside the store. “Around 5 a.m. the crowds in the plaza broke through and the line disappeared entirely. Everyone was fighting, several people were hurt,” said Huang, who wanted to buy a new iPhone for his girlfriend. “The police just started hitting people. They were just brawling.”