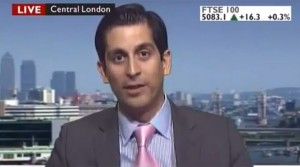 Alessio Rastani went on a UK news channel on Monday to discuss where stock markets were heading. By Tuesday he was an Internet sensation.
Was it that he said, as someone who bets against markets rising, that he “goes to bed every night dreaming of a recession?” Was it that he said investment bank Goldman Sachs ruled the world and not governments? Or was it that bloggers started to ask if he was just a “fake trader” who duped the media?
Take your pick. But Rastani caused a stir by saying what many people think those in the markets think anyway — it’s OK to make money out of falling markets and there is no reason not to prepare for that.
He certainly thinks the markets will crash again and people should be prepared for that, and that the average person should take steps now to protect their assets, or be prepared to lose their investments.

Be Gees One Night Only FULL Concert Video