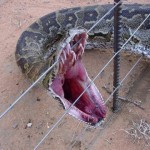 “We would release the python deep in the forest as to prevent it from crossing parth with humans again,” he said.