A bunch of 30-40 thugs allegedly attacked the students that were camp out at Dataran Merdeka early in the morning. 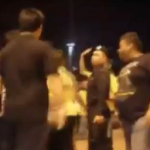 A 41-year-old man who was a supporter of the protesting group that comprised of about 30 men and 10 women was seriously injured.

A dozen others suffered light wounds after the attackers who came on motorcycles and cars charged at them at about 2.30am.

Two police detectives who intervened to prevent the attack were also beaten up by the thugs.

Lew Pik Svonn, a member of Occupy Dataran which supports the protesting group said the gang of thugs who wore black t-shirts charged at them without warning before assaulting them.

“Police had taken immediate action. Is five or six minutes a long time?”

He also denied claims that the police had stood idly by and watched the drama unfold.

“If we had just watched, the incident would have got worse… One of our detectives was injured on his back and has been taken to hospital for treatment,” he said.

Mohmad told reporters that seven others, including a businessman, were injured during the incident.