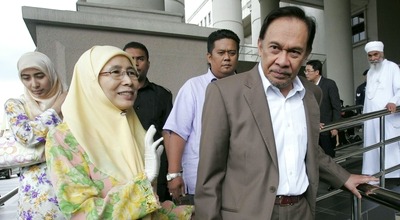 KUALA LUMPUR — Malaysian police said Friday they would allow a rally for opposition leader Anwar Ibrahim to take place when the court delivers a verdict in his sodomy trial at the start of next week.
The move is seen as a rare concession in the Southeast Asian country where public protests are usually quashed.

Anwar’s party has said they are planning to gather 100,000 people outside the Kuala Lumpur High Court on Monday to support their leader, who was charged in 2008 with sodomising a young male former aide.
Anwar faces up to 20 years in jail if the court finds him guilty. The 64-year-old has denied the sodomy charge as politically motivated to end his ambitions to take over the government.
Kuala Lumpur police chief Mohmad Salleh told AFP that he met Anwar’s colleagues Friday and would allow them to go ahead with the rally, reversing authorities’ earlier stand that supporters should not gather at the court.

“We are going to monitor the situation to make sure that it is a very orderly assembly,” he said, adding police would intervene if the gathering got out of hand. “Hopefully it doesn’t happen,” he said.
Azmin Ali, deputy president of Anwar’s Parti Keadilan Rakyat, said the police permission was a first. Previously they have refused to allow opposition rallies and broken them up with tear gas, water canon and mass arrests.

“We had a good meeting today… It’s a good beginning,” Azmin told AFP. “I assured (police) that based on our past experience we would be able to manage the crowd provided there is no provocation from any irresponsible parties.”

He said 500 opposition members would be deployed to make sure the gathering is peaceful. Anwar is currently on a countrywide tour to declare his innocence and gather support.
Meanwhile, the Malaysia Department of Islamic Development warned in a sermon read out in some mosques for Muslim Friday prayers that people should not attend street demonstrations, saying these undermined security and are “extreme” and “contrary to the true teachings of Islam.”

The trial marks the second time in a decade that Anwar is facing sodomy accusations, which he has vehemently denied as government plots to smear his image in this conservative Muslim-majority country.
The most recent charge emerged months after his opposition coalition made unprecedented gains during 2008 general elections, though still failing to unseat the five-decade-ruling Barisan Nasional coalition.
Anwar, a former deputy prime minister, was convicted in 1998 on sodomy and corruption charges after a fallout with then prime minister Mahathir Mohamad. After six years in jail the conviction was overturned and he was freed.

Prime Minister Najib Razak, trying to shore up support ahead of elections expected this year, has said he will grant more civil liberties, including guaranteeing the right to gather peacefully.
But critics say a new law, passed by parliament late in 2011, does the opposite as it outrightly bans street rallies. Police have also continued to break up protests, recently arresting 17 people during a student demonstration.

The Malaysian Bar Council welcomed Friday’s police announcement, saying it was “commendable.”
“This approach reflects a positive change in the mindset of the government, and is an outlook that the Malaysian Bar hopes will continue and be expanded further,” its president Lim Chee Wee said in a statement.
Copyright © 2012 AFP.