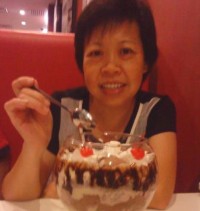 A special education teacher, who went missing after leaving her house in Bandar Kinrara 2 to pick up one of her students for class, has been found.

Teoh Soo Kim (pic), 51, is currently being warded at the intensive care unit of Sungai Buloh Hospital and is in serious condition.

Police said Teoh had been found by passers-by at 11am on Wednesday at the Talam oil palm estate in Kuala Selangor.

They added that the suspects were being tracked down while Teoh’s car had not been located.

Police and doctors were unable to immediately identify Teoh, so authorities informed her husband that there was a woman who matched his wife’s description warded in the hospital.

Her husband, sales executive Tan Lee Ming, 48, said when he saw the woman, he did not immediately recognise her because her face was swollen and wrapped in cloth.

“I saw her eyes and recognised it was her,” he said when contacted last night, adding that he was relieved that she was still alive and hoped that she would recover soon.