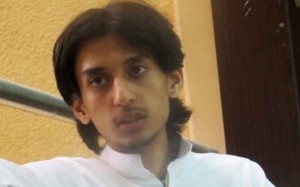 Malaysian police detained a Saudi columnist who fled Saudi Arabia after his tweets about the Prophet Muhammad touched off public calls for his execution, Malaysia’s state news agency reported on Thursday.

The writer, Hamza Kashgari, was detained on arrival on Wednesday at Kuala Lumpur International Airport, the Bernama news agency said, citing what it said were sources at Interpol.

Saudi Arabia was believed to be awaiting Mr. Kashgari’s repatriation, according to Bernama. The Saudi government has made no official comment since announcing early in the week that Mr. Kashgari had been banned from writing for publication and would be subject to legal action.

Mr. Kashgari, a 23-year-old newspaper columnist from the coastal city of Jeddah, tweeted a series of musings on Saturday about an imagined meeting with the Prophet Muhammad.

Some religious conservatives in Saudi Arabia seized on the messages, describing them as a curse against the founder of Islam and calling for the public to demand punishment.

Fear for Saudi journalist Hamza Kashgari as he is deported