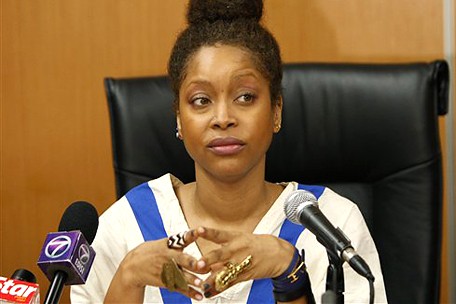 Erykah Badu’s concert in Malaysia was supposed to be held yesterday but due to unfortunate circumstances it had to be canceled.

Kudos to event organizer Pineapple Concerts who tried everything to get the show going but in the end it was not to be.

The whole issue arose when a picture of Badu with a tatto representing the word ‘Allah” was printed by TheStar, Muslims were outraged and one thing let to another and the ban was imposed.

Minister of Information Datuk Seri Utama Rais Yatim tweeted that the Cabinet agreed with PUSPAL’s move to cancel the concert. In an earlier tweet, he reiterated that the cancellation was justified.

The minister added that the exhibition of the symbols for Allah and Prophet Muhammad were unacceptable to Malaysia’s majority Muslim people.

Badu on her part pointed out that she had no tattoos and the ‘Allah tattoo’ at the center of the controversy was body art from a photoshoot referencing “The Painted Lady”, a character from the 1973 surrealist film The Holy Mountain by Chilean-French filmmaker Alejandro Jodorowsky. In the film, “The Painted Lady” was a character who had various names of God etched on her skin.

When asked, the American singer said that she knew the meaning of the symbol, and that her photo had included the symbol for other names of God, including Jehovah and Yahweh. She said the interpretation of the Jodorowsky imagery was, “We are all one.”

TheStar today issued an apology and says no malice was intended.

In large part we do know. But mistakes can happen out of carelessness, thoughtlessness, plain silliness or, as in the case of the photo of American singer Erykah Badu’s body art with the word Allah in Arabic, ignorance.