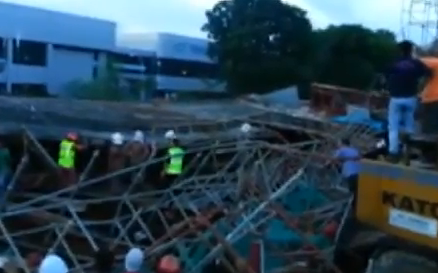 A ramp leading to the still-under-construction second Penang bridge at Batu Maung collapsed at around 7pm, and a car and two motorcycles are believed to be trapped under the debris.

Fire and Rescue Department still trying to ascertain if there are any people trapped under the rubble.

According to Batu Maung assemblyman Datuk Abdul Malik Abul Kassim, the crossing at the construction site at the landing of the second bridge collapsed around 7pm.

He said the temporary supports on the bridge collapsed when concrete work was being carried out.

The collapsed area is just about the width of the road at the stretch in front of the Motorola building.

“Eyewitnesses say one or two cars and a bike were buried, the rescue team of police and the fire department are there clearing debris now.”