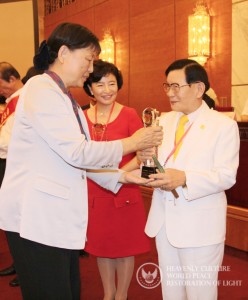 At the 70th Anniversary of the end of World War II on August 15th, a historical meeting for world peace took place. Mr. Man Hee Lee, a Korean War veteran, and his world peace delegation embarked on a journey on August 14th to China for 5 nights and 6 days. During his stay in China, Mr. Lee, as the representative of Heavenly Culture World Peace Restoration of Light (“HWPL”), had a meeting with Zhang Meiying, the Vice President of the National Committee of the Chinese People’s Political Consultative Conference (“CPPCC”) of China, to discuss peace on the Korean Peninsula and Northeast Asia.

At the Great Hall of the People in Beijing, Mr. Lee claimed that leaders of every country should sign a peace agreement that will bring the cessation of war and world peace. Following his speech, Ms. Zhang Meiying, agreed to his claim and announced she will also strive for peace in China. Inspired by his speech and work for peace, the Vice President granted an award for ‘Peace Advocate of World Peace’. Last January, Mr. Lee brought peace to the war-torn region of Mindanao, Philippines, where religious conflicts between Catholics and Muslims caused over 10,000 casualties. This time around before visiting China, the representative of HWPL hosted a Peace Walk with about 12,000 participants at Zamboanga, Philippines and showed the world that world peace is possible.

Various meetings were held during Mr. Lee’s visit to China. On the 17th, he had a meeting with the President of Social and Population Management Graduate School of Renmin University of China and held a press conference with the media on the topic of peace. The next day, a Peace Forum was hosted with various national and community leaders to discuss how to achieve peace in Northeast Asia and the world. A high-profiled delegate who participated in the forum mentioned that the world peace can be achieved when the people of Korea and China become one and focus on the work of peace.

Diverse topics discussed to bring the peace in Northeast Asia and the Korean Peninsula
Numerous media in China came to participate in the Peace Forum and press conference
Mr. Lee’s visit to China was part of his 13th Peace World Tour to spread the message of peace. Territorial disputes in Asia and denuclearization on the Korean peninsula were the two topics discussed during the Peace Forum. The media of the world were busy covering the Peace Forum and the peace activities of Mr. Lee. The Chinese media in attendance included the Central Radio Station, China Daily News, and People’s Daily.