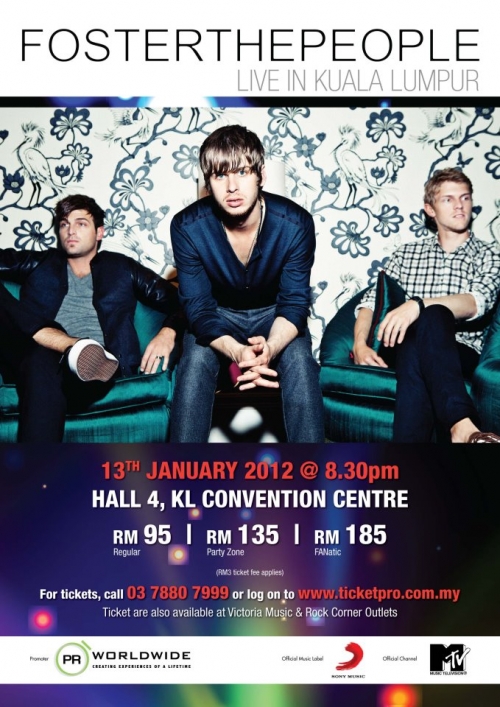 Music-lovers, get ready to put on your ‘Pumped Up Kicks’ because Foster the People is (FINALLY) coming to KL!

With their favorite hit song ‘Pump Up Kicks’ became a viral triumph on local radio in mid of 2011, the American indie-rock stars, Foster the People is hitting the shore this 13th January 2012 at KL Convention Centre in Kuala Lumpur.

The group consisted of Mark Foster who’s the lead vocal, Cubbie Fink (bass & backing vocals) & Mark Pontius (drums & extra percussion). The group’s genre of music portrayed as  ‘electro-pop’ or ‘dance-rock’ — which mostly gets people into their twisted-feet-kind of feeling.

‘Torches’ is their first album, released in 2011 by Columbia Records and Startime International in US.  Their album composed of 10 tracks, and upon of all the tracks, ‘Helena Beat’, ‘Call it What You Want’ & recently ‘Don’t Stop’ became everyone’s favorite non-stop playlist.

Recently, the band was nominated for ‘Best New Artist’ and ‘Best Rock Video’ for MTV Video Music Awards and won the ‘New Artist of the Year’ for SharkOne Awards.

Many has compared them with the hipster-like band called MGMT, which recently did their show in Kuala Lumpur last year March 2011.  According to NME, the band was surprised that they were compared to MGMT and find it really ‘flattering’ since their influences in songs are very similar.