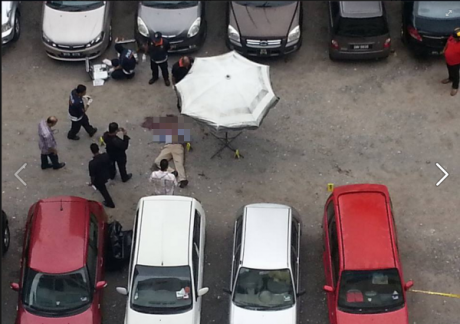 Social media is abuzz with news of a broad daylight shooting of a couple at Jalan Ceylon in Kuala Lumpur today.

According to TMI an Iranian with permanent resident status in Malaysia was shot dead at the car park.

The man, who was in his 70s, was walking towards his vehicle with his wife when a gunman approached him and fired several shots at his back, killing him on the spot in the 1.30pm incident.

Eye witnesses said the couple had earlier visited a temple in front of the car park.

An eyewitness, who declined to reveal his name, said he was at his food stall when he saw a man walking towards the couple.

“Then I heard gunshots and saw the couple fell. I ran to safety when I saw the gunman running in my direction,” he said.

He said the gunman, who wore a cap and sunglasses, fled in a taxi.

The man that was gunned down has been identified as Arab-Malaysian Bank founder Hussain Ahmad Najadi.