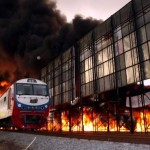 No fatalities were reported, but so far eight people were injured in a massive explosion due to a collision between a train and a fuel tanker in front of the Kota Kinabalu International Airport, this evening.

Sabah Police Commissioner Datuk Hamza Taib told reporters at the scene that the rest of the passengers in the carriages either managed to escape when the collision occurred about 5.30pm or rescued when firefighters arrived.

The victims were immediately sent to Queen Elizabeth Hospital for treatment, he said.

According to Hamza, the fuel tanker was crossing the railway track to send fuel to a gas station, but was not quick enough to completely cross the track, causing the train to ram into it.

He said the 41-year-old driver was taken by police for further investigation, while the 51-year-old train driver sustained injuries on his legs.

He said they were also assisted by a water tanker and two fire engines from the Airport Fire and Rescue Unit.

A Malaysia Airlines staff, Busri Asad, 39, related seeing some passengers escaping from the train windows when the collision occurred.

“I also saw people running to the back of the carriages. About 10 minutes after the collision, there was an explosion and a massive fire broke out,” he said.