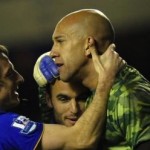 Tim Howard became only the fourth goalkeeper in Premier League history to score a goal when the Everton stopper struck from inside his own half on 63 minutes, a long clearance from the American aided by the wind to beat his opposite number Adam Bogdan in the Wanderers’ goal.

Video: (may take time to load)