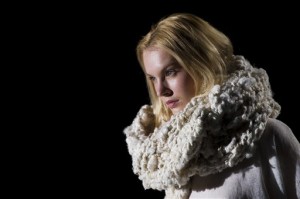 Internationally, Rio is almost synonymous with saturated hues and minuscule spandex-based separates, but Herchcovitch dared do drab with a collection that would have been at home on the more commercial catwalks of Milan or New York — where he also shows.

But Herchcovitch was the sole dark and serious note in an otherwise color-drenched day that included a sumptuous kimono collection from Patachou and rhinestone and silk flower-covered offerings at Acquastudio.

For his second line, the cheaper more youth focused Herchcovitch label, the Sao Paulo-based Herchcovitch looked to the proto-hipsters of 1980s-era New York, sending out models in shirtdresses and bustier catsuits in bleach-splattered raw denim. Cropped leather jackets and vests topped off the outfits, which were accessorized with ’80-style sunglasses and wedges with translucent plastic heels.

The girls’ hair was teased into fluffy clouds that resembled the nest of a particularly large and enterprising rodent.

Among the biggest names in Brazilian fashion, Herchcovitch shows his premium label in New York. Known for a wacky eclecticism that was utterly lacking from Tuesday’s show, Herchcovitch has garnered considerable critical acclaim.