Today news, according to The Star in Kuala Lumpur that the registration of illegal foreign workers that will held for two weeks beginning this July 11. 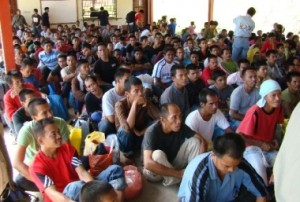 According to Muhyiddin that this after chairing the cabinet committee meeting on foreign and illegal workers.
It had been previously reported, the move that was to reduce the number of illegal immigrants in Malaysia that estimated to be about two million.

Mafor – Some husbands are subjected to Kinky Sex