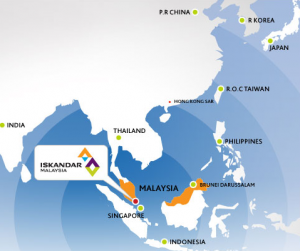 President and Chief Executive Officer Datuk Syed Mohamed Ibrahim said the investment project, over two phases, will commence next year and be over a period of about 10-15 years.

“This is the first real estate investment by a foreign company in Medini Iskandar Malaysia and the biggest project investment in the area, to date,” he added.

He was speaking to reporters after signing two framework agreements with Qingdao Zhuoyuan for the development of mixed residential and commercial projects in Medini Iskandar here, today.

The first framework is for the establishment of a joint venture between Iskandar Investment and Qingdao Zhuoyuan to develop a residential project on a 7.256-hectare plot in Medini North, in close proximity to Legoland Malaysia.

The total sales value (TSV) of the project, 80 per cent owned by Qingdao Zhouyuan, is RM157.6 million with an estimated investment reaching RM1.2 billion.

The second framework agreement is for the sale of lease for a 3.896-hectare plot, also in Medini. Qingdao Zhouyuan will establish a mixed-use development on the site, which has a TSV of RM70.8 million and total investment estimated at RM520 million.

“Qingdao Zhouyuan’s investment into Medini, is a clear affirmation of the company’s confidence in the growth potential of Iskandar Malaysia and Iskandar Investment as its investment partner, to take on opportunities in Southeast Asia,” Syed Mohamed said.

The discussions are expected to be finalised in the next six months.